Hackanui is a “Natural User Interface” contest that was held at Caffeine Spaces, an area part of the “Technology Business Incubator.” at FAU Research Park. We won 1st Prize and a bunch of Microsoft Kinects and Primesense units.

Many came to the event, mostly to see and participate as developers and create something cool with a Kinect or any other cool NUI interface. The “Hacker House” team was in the house!  Last week, I had an idea that was put to practice, among other ideas in the “Natural User Interface” but this one I called “Airthenticate.” I used cloudhula.com and purchased arithenticate.com

Airtenticate.com is now operatational and is running on an Amazon Web Server under EGLA COMMUNICATIONS’s cloud.  What Airtenticate solves is the need for people to validate their identity using thsir regulular “Signature” to be waved in the air and that scribble be used for authentication purposes.  The cumbersome process of authenticating by typing on a keyboard or your mobile phone is then eliminated with airthenticate, as your hand waving in the “air” is what you normally do in a piece of paper  and signing a document.  Hence, validation using your “signature”  can now be used to access accounts, validate your login credentials, and who knows authorize a payment.

I used my brand new MacBook Pro 16G and 512G of Disk space for the client side, and Amazon Web Services for the server-side of the transaction. EGLA COMMUNICATIONS, or myself, teamed up with my friends at Silver Logic, as they took the effort on using a “Leap Motion” device to perform exactly the same thing. Juan, David, Brandon, and new friends Jikku, Matt, and Matt2.

The Airthentication prototype is quite interesting as it was implemented using a “PrimeSense” sensor, and OpenNI, SimpleOpenNI and NiTE middlewares.   There was a learning process just in how to install the PrimeSense in the MacBook Pro, but that was not a hassle as long as you had all the libraries worked out. In fact, I think that problem was solved previously when the Arduino board could not connect to my Mac. The secret was:

There are quite big challenges in how one can configure and detect a signature, processing is not easy, and most likely will have to be done in the cloud.  For instance, you have a sequence of X,Y,Z coordinates, or maybe other coordinate system that needs to be converted into a spatial coordinates that are then sent over to the server. The server needs to detect that the trajectory of those points maps your signature. As usually, I did a search online and found several research papers in that area, the one I liked the most was MobReduce. 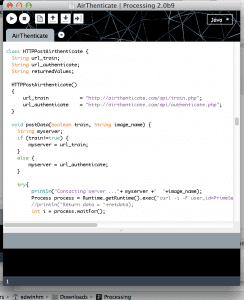 However, you can barely do anything in 12 hrs.  We decided to capture some training and “signatures” saved onto my Mac here, and converting those  traces into images. 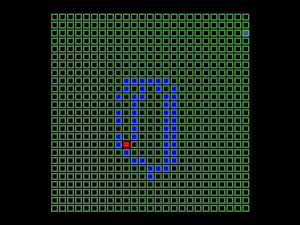 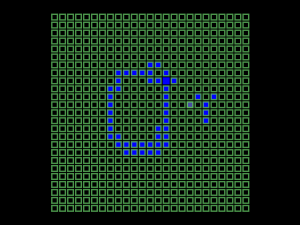 Correlation or Error is 1% approximately: 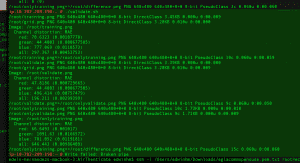 Although this method does not seem to be that  ROBUST!  the mechanism used is sufficient to show a proof of concept and the feasibility of using this technology to validate and it brings a lot of new ideas on how to improve this.